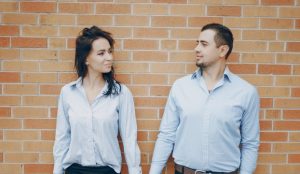 I am pretty sure that this post will attract more men than women, but in reality the issue is much more important for ladies. Undoubtedly, you know that electromagnetic radiation (EMR) is a risky factor for human health, and under some circumstances a lot of health problems can be caused by EMR exposure. This is especially true for radiofrequency/microwave overexposure from modern wireless devices like cell phones, Wi Fi routers or smart meters. (If you are not familiar with the issue, see my previous posts, please.) But when the question is if EMR exposure is equally harmful for women and men, the answer is NO. As it turned out, for some reasons, women suffer from electromagnetic radiation much more often than men.

For example, surveys among electrohypersensitive (EHS) people from all over the world reveal that the majority of this affected population is women. Women make up 68% of EHS persons in Netherlands [1], 77% – in Sweden [2], 81% – in Finland [3], 89% – in Spain [4], and up to 95% – in Japan [5]. And when French researchers analyzed effects of cell phone base stations on subjective symptoms of people living around, they have found that women reported unpleasant symptoms much more often than men [6]. For example, women living nearby (up to 300 m) have had headache 3.2 times more often than men (45.6% of women and only 14.4% of men were affected). And depressions occurred in women living near the base stations 2.7 times more often than in men. Also, women experienced memory loss, feeling of discomfort, fatigue and sleep disorder much more often than men. Ironically, among 18 symptoms assessed by French researchers, only one occurred among men more often than among women due to cell phone tower neighborhood. Guess which one. Only sex drive (libido) was affected in men 50% more often than in women. (Maybe men were more concerned and more careful in assessment of this particular symptom.) Anyway, all surveys on EMR health effects invariably demonstrate that women are much more sensitive to electromagnetic radiation than men.

I guess, those “experts” who believe that EMR health effects are just psychological issue may argue that it’s just due to higher suggestibility of women. But for those people, who are suffering from EMR exposure, women and men, such “explanation” is a nonsense. The serious question is what in reality lies under such sex-dependent effects of EMR exposure. And is it only the EMR reveals such different reaction of female and male organisms? The answer on the last question is NO again. Many disorders and diseases have expressive sex-dependent nature. For example, women suffer significantly more often than men from food allergies, asthma and anaphylaxis [7]. Even rheumatoid arthritis occurs in women 2-3 times more often than in men. And such severe long-term autoimmune disease as lupus affects women 6 times more often than the opposite sex. On the other hand, autism has place among boys 5 times more frequently than among girls [8].

David Page, director of the Whitehead Institute and professor of biology at the Massachusetts Institute of Technology states that sex/gender-dependent health problems is one of the most intriguing and underestimated issues in modern biomedical science [8]. In reality science doesn’t know why some diseases more often affect women and some others – men. The simplest explanation is it’s due to sex hormones (the obvious difference in female and male physiologies). But Dr. Page proposes to dig deeper and to look on genetic differences between two sexes. The matter is that genetically a woman and a man are two rather different species. Let’s see. Human genome consists of 46 chromosomes (23 pairs). And all of them are almost identical for women and men except of one. So-called sex chromosomes are different – women have two X chromosomes and men have X and Y chromosomes. What does it mean? Genetically any two men on the planet are almost identical (independently on the race, by the way). They share 99.9% of the same genes. The same is true for any two women. But if we compare a random woman and a random man, they will have only 98.5% of similar genes (due to differences in sex chromosomes). The image below visualizes the difference between X and Y chromosomes in human genome [9]. So when we have different reaction of human sexes on the EMR exposure, it’s just a demonstration of huge differences in woman and man biology. And a bulk of biomedical research should be done in the field yet. By the way, this different reaction of different sexes on EMR can give us some valuable keys for understanding of EMR-related health issues including electrohypersensitivity. Obviously, all maps of biomedical indexes of affected women and men should be analyzed and compared. And any significant shifts should be assessed and analyzed again in sex-dependent manner. You know, even such typical blood tests as level of hemoglobin and red blood cell count, or immune responses are different in women and men, to say nothing about notorious sex hormones. And reaction of these different genetic, biochemical and physiological backgrounds on EMR exposure can be very demonstrative and useful for analysis. So, we have a long way to go in the issue. But hey, man, what about electromagnetic radiation and sex as such? Sorry, guys, science doesn’t know much about effects of EMR exposure on human sexual activity. But you will not like that little that science knows. Except of above-mention French study that detected decreased sex drive in both women and men living under the exposure from cell phone tower, I have met only two studies on EMR effects on sexual behavior (not on man infertility or sperm quality but exactly on sexual activity). Both studies used extremely low level of EMR exposure of males from cell phones during a month or so, and both studies detected a significant depression of sexual activities of males at the end of experiments [10, 11]. The only issue is that in one study the males were rabbits and in the other they were mice. It’s all from science on the issue today. Nevertheless, I guess you agree that affected due to EMR exposure people hardly have better sexual life than unaffected ones. And if you are lucky enough and don’t have subjective symptoms (yet) from everyday overexposure to wireless radiation around, be smart enough and don’t hurry into that affected part of population. Practice the precautionary principle – the less radiation the better, and avoid unnecessary exposure as much as possible (see some my practical tips here).